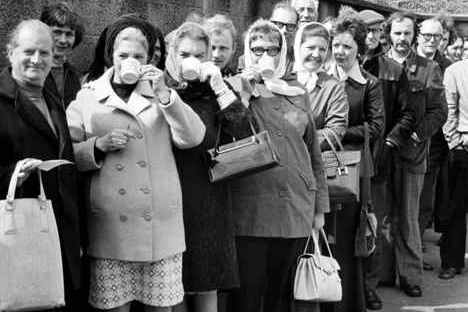 Peggy stomped her foot when she saw the queue at the front door.

She adjusted her hat. She wished she could do something about her stockings; they’d slipped down, nearly to her knees, in her haste from the tram to the mall.

Peggy took her place at the back of the queue. It snaked its way from the department store’s doors, past the stationers, to Baxter’s Tea House. Peggy gazed in at those inside. They looked cosy warm, sipping the golden, hot liquid in pretty tea cups poured from matching pots. Bliss. She’d head there afterwards, as a reward. Sorely needed for an impatient young woman, standing in drizzling rain, with her stockings sliding away from the suspenders.

The department store’s sale was always well attended. Especially on the first and second day. Everyone wanted to nab a bargain; some families waited months, making do with threadbare sheets and towels, mending shirts and darning socks. In the years after the war, everyone was extra careful with their pennies. Not a family had been unaffected by loss, by shell-shock, by hard times.

Peggy glanced at those in the queue. What was the delay? She looked at her watch, by her reckoning, the doors should have opened five minutes ago. She turned to look the other way, astonished to see how far it snaked behind her.

The crowd was growing restless. People were becoming agitated in their impatience. A gentlemen, about five back from the front, stepped out. What a silly man, thought Peggy. He’s lost his place now. He faced those waiting in line and began to sing. His arms outstretched, he beckoned everyone to join in.

‘It’s a long way to Tipperary…’

Soon those around Peggy lifted their voices. Smiles took the place of frowns. Everyone visibly relaxed. The man walked up and down the length, encouraging and cajoling. He got to Peggy, bent on one knee, and tipped his hand. In spite of herself, her frustration at being held up and her desperate thirst for a cuppa, she grinned.

‘May I?’ asked the gentlemen, extending his arm for Peggy to link hers through.

‘Allow me to introduce myself,’ he said. ‘I’m Mr Matthias Baxter. At your service.’

‘Pleasure to make your acquaintance. Perhaps, if you so please, after you’ve done your shopping, we might meet inside my tea rooms to quench our thirst?’

‘Let’s give each other…’ Mr Baxter looked at his fob watch. ‘One hour? Is that enough time.’

They arrived at the front doors; Mr Baxter held it open for her. Peggy skipped through, checked the list her mother had pressed into her hand, and with fresh impetus, set about ticking the items off.

View all posts by lindakempwriter

This site uses Akismet to reduce spam. Learn how your comment data is processed.

I'm a freelance writer, living in Melbourne with my husband and three kids. I have always wanted to write my stories, yet it's only recently that I've allowed the voice within to be heard.
Follow Musings from Melbourne on WordPress.com

The world awaits you with love

Spiritual healing for Love back and solve all problem